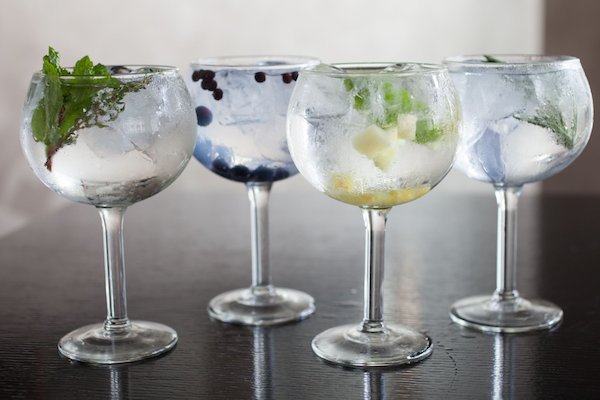 September 2015 – Little did we know, but our introduction to Spain’s “national drink” began in 2012 at the home of Enrique Sr. & Immaculata, San Sebastian restauranteurs and the parents of my Spanish tutor, Amaia. It has also become my newest obsession and I had to find out more.

Enrique asked whether we would like a “Gin Tonic” (in Spain the “ampersand” is dispensed with) and what was presented to us was one of the best gin tonics that we had ever experienced. Presented in a large, oversized balloon wine glass (copa de balon), it was filled to the brim with huge oversized ice cubes, so as not to melt too quickly to dilute the flavours of the gin. Included in the glass was one single smaller cube of frozen lime juice with a raspberry suspended in it. 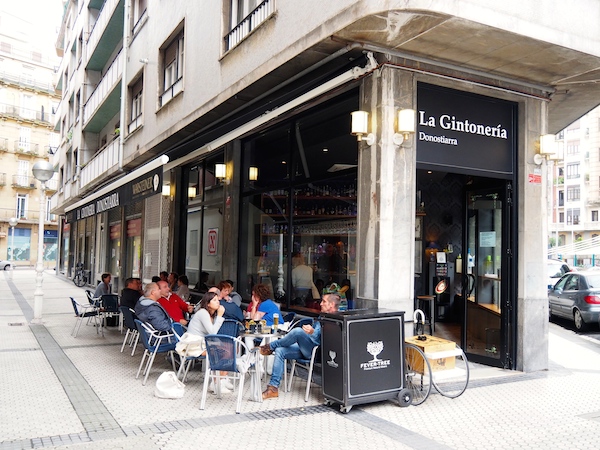 Fast track to our recent “Discover Basque Spain” tour last month. Amaia, and her husband Nathan, took us to “La Gintoneria”, one of San Sebastian’s newer bars that do nothing but serve gin tonics. Watching the bartender’s technique for making an “Espanol-style” gin tonic (forget just throwing a few ice cubes into a highball glass with a slice of citrus, gin and some poor quality tonic), I was mesmerized by the barman’s showmanship and the alchemy that went into creating the perfect gin tonic. It was then that I had to find out more about Spain’s obsession with what I once thought was a “simple” mixed drink created by the British in India during the nineteenth century (purely for “medicinal purposes”…more about that later). 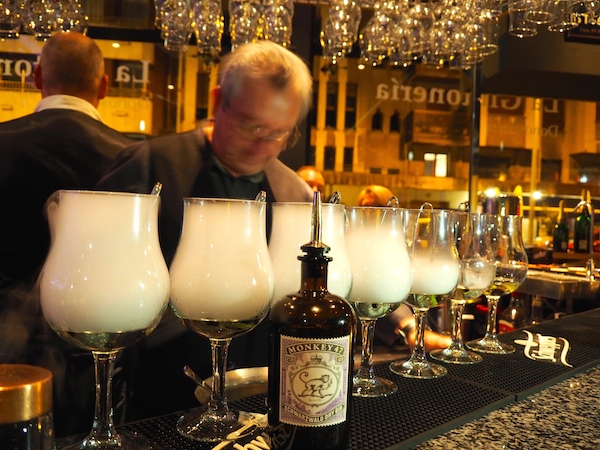 While enjoying our GTs with Amaia & Nathan, a quick Google search revealed that Spain rivals England as the biggest drinkers of gin in Europe, and it is the biggest market for gin in the world per capita. Forget the fine wines from La Rioja in the north, the famed finos of Spain’s southwest, or the easy drinking sangrias of the south, the “Gin Tonic” is Spain’s national drink. Who would have thought?

What came first…the Gin or the Tonic?

Gin, commonly known as the quintessential English spirit, was actually invented by the Dutch in the sixteenth century. Dutch physician, Sylvius de Bouve, used the essential oils of juniper berries, known to improve circulation and cure other ailments, to create a highly alcoholic medicine called “Jenever (Genever)”. English soldiers fighting in the Dutch War of Independence in the 1580’s nicknamed the drink “Dutch Courage” and the term “gin” became a derivation of “jenever”.

Tonic, on the other hand, was “discovered” by the Spanish in the seventeenth century after conquering parts of South America. During the 1640’s, Countess of Chinchon, the Spanish wife of the Viceroy of Peru, fell ill with malaria and Peru’s local Quechuan tribal healers cured her fever using the bark of the indigenous cinchona tree. Having been cured of her malaria from this “fever tree”, the countess brought the ground cinchona bark and quinine water recipe back to Europe. In the seventeenth century, the ground cinchona bark was recognized by Europeans as “Countess’ powder” or the “fever tree”.  During the early part of the 19th century, chemists had isolated the quinine, an anti-malarial alkaloid from the cinchona bark, and it formed the essential ingredient in “tonic water”.

With the Dutch creating “gin” in the 16th century; the Spanish discovering “cinchona bark” in the 17th century; and the isolating of quinine to create “tonic water” in the early part of the 19th century as an anti-malarial, it wasn’t until the the mid-1800’s that cultures collided with the British in India.

By the 1850’s, with the growing number of British officers required in India to control the rapidly growing colony, the ability to fight the deadly threat of malaria was paramount. The British issued rations of quinine in the form of a bitter tasting “Indian Tonic Water”. The addition of gin to the water helped to not only reduce its bitter taste, but also added its intoxicating effects and the “Gin & Tonic” was created…crash!!

Where the British may have invented the drink, the Spanish have elevated it to a Michelin-star mixology art from. Some say that Spain’s newest obsession with gin tonics and its proliferation of dedicated “gin bars” with “GinTonic Menus” began about a decade ago in the Basque country of northern Spain, and the beautiful city of San Sebastian. It was the drink of choice by many Michelin-starred chefs from restaurants like Arzak and El Bulli, who would drink gin tonics in copa de balon, large Bordeaux wine glasses, filled to the brim with ice to keep their drinks cool in a hot kitchen at the end of service, and would carry these with them as they came out to the restaurant to meet with their diners. It made sense that gin tonic should be served in a large oversized wine glass. Like a complex fine wine, a gin tonic is all about the bouquet of botanicals – juniper mostly, but often dozens more – where each sip reveals themselves at different moments to provide a complex world of sweet, sour and bitters.

Not only did the “Espanol-style copa de balon” trend begin, but there was also a boom in the variety of gin producers as Spain turned the resurgence in gin tonic into an obsession. Even a small bar in Spain might have between 20-50 bottles of gin and up to 15 different tonics to choose from. Order a gin tonic in most bars in Spain, and the first question the bartender will ask you is “What type of gin?”. From there the bartender becomes an alchemist and will weave magic into your gin of choice through the addition of various other herbs, botanicals, citrus and scents to enhance that particular brand’s flavour. To understand the current status of gin tonic mixology in Spain, you need to see this art form performed at the bar, preferably repeatedly, as it is always great entertainment to watch. Please click here if you’d like to see a 2:30min clip that we’ve uploaded to YouTube to see one such barman’s technique we watched.

Use the largest balloon wine glass that you can find, to allow the flavours to be released adequately.  Chill the glass in the freezer (optional) then fill it to the brim with good quality, extra large ice cubes*.

Selecting or making the right ice cube is an important part to any cocktail, especially a Gin Tonic. In Spain, from corner bars to Michelin restaurants the ice cubes are extra large & dense so they melt slowly in your drink, ensuring that the flavours of your GT won’t get watered down. Avoid the “chippy” fuel station ice or small ice cube trays.

*While in Spain we bought “Gin Tonic” Spherical Ice Cube trays, which we have also found are stocked by David Jones for around $AUD10.95 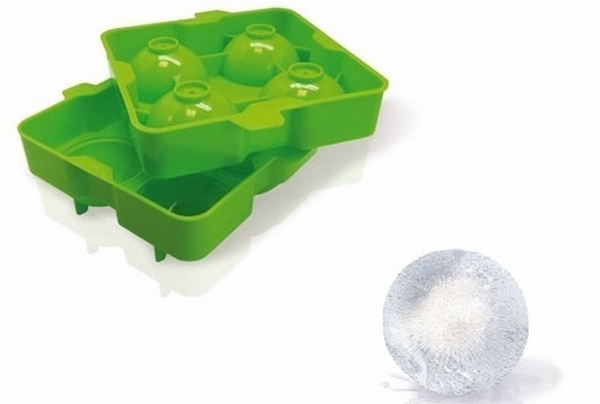 For the classic Gin Tonic, hold the citrus above the glass and cut a “bandaid” size piece of lime or lemon zest, ensuring that none of the bitter white pith is attached. With two small “claw” tongs, scrape the zest a number of times and then twist over the ice to extract the citrus oils, before placing it into the glass (alternatively, I use a citrus zester to zest strips  into the glass). An Espanol Gin Tonic usually only ever uses the zest, never a slice or wedge of citrus. If you like, you can use Enrique’s version of adding a small cube of frozen lime juice to the glass. 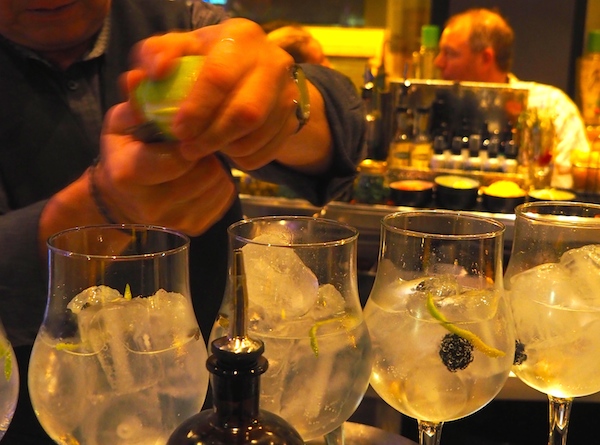 Select the gin of your choice, based on your favourite flavour profile. Each gin brand (Spain now has more than 30 of their own and 300 international brands to choose from) will have their own closely guarded secret of botanicals. Juniper is the main flavour, while other botanicals commonly used are coriander, angelica, citrus peel, cardomom, cinnamon, cubeb berries and nutmeg, and many more. 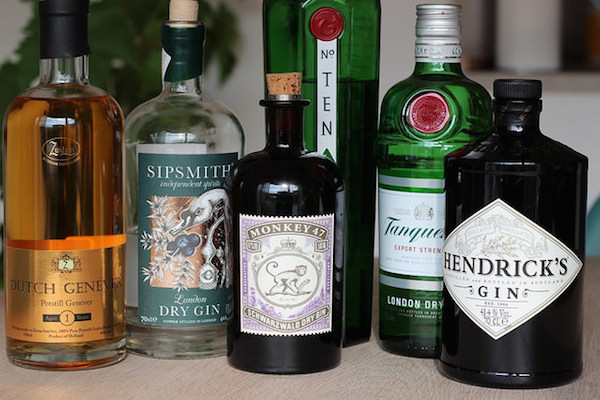 Some examples of the more common gin brand flavour profiles include: 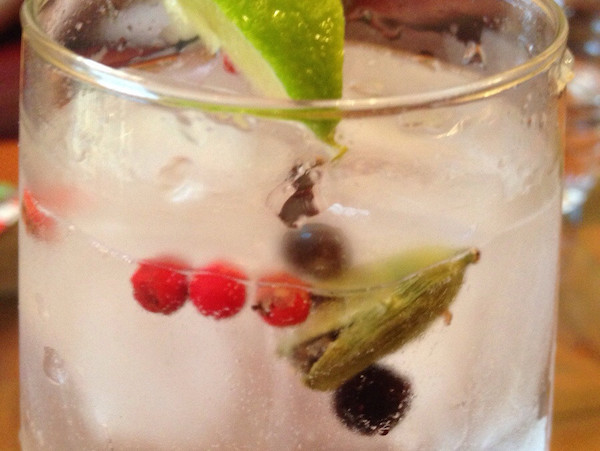 Add a pinch of a few classic gin botanicals of your choice to the glass, without overdoing it. These might include:

It’s called a Gin Tonic for a reason, it principally has only two ingredients. Don’t spoil your favourite premium flavoured gin with an inferior & sickly sweet tonic, many flavoured with artificial sweeteners. Spain has more than 30 types of tonic to choose from, including specialist producers such as Fever-Tree (available in Australia), Fentiman’s and Q . Made from real sugar and natural quinine bitterness, these premium tonics will provide the final magic step in making your GT a world of sweets, sours and bitters to be discovered in every step. 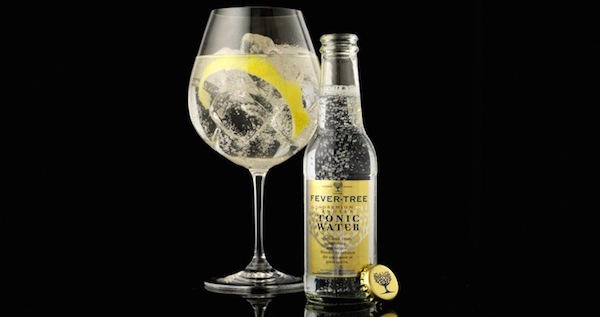 Please don’t hesitate in contacting us at nico@urbanprovider.com.au with any questions or comments, and we will be happy to reply to your request!